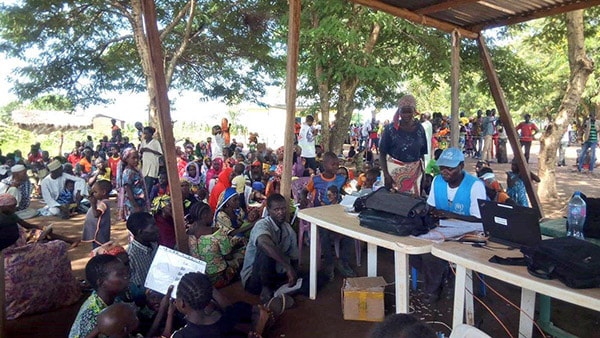 June 20th is the day dedicated each year to the commemoration of the courage and resilience of refugees around the world, forced by the barbarism and intolerance of governments to go into exile. It is also an opportunity to take stock of the situation of refugees. According to UNHCR, 65.6 million people were uprooted worldwide by the end of 2016 due to conflicts and persecutions.

From now on, at home in Cameroon, this commemoration painfully reminds us of the bloody and blind tragedies that are taking place in the northern, eastern, north-western and south-western parts of our country. What seemed to be impossible has become a brutal reality for us in Cameroon.

The case of the English-speaking regions of our country is of particular concern. In fact, the incompetence and condescension of the government led to the degeneration of legitimate corporatist claims into a serious crisis, then into an armed conflict ravaging the South-West and North-West regions, thus sending thousands of innocent and defenceless Cameroonians into exile. The lucky ones managed to find refuge in neighbouring Nigeria. I take this opportunity to present to this brotherly and friendly country all the gratitude of the Cameroonian people, for the fraternal welcome it offers to our compatriots in distress.

According to the Nigerian Emergency Management Agency (SEMA), more than 43,000 people have found refuge in the states of Cross River (33,000) and Benue (10,000), since the beginning of the conflict in the two English-speaking regions of Cameroon. To these are added thousands more established in the states of Taraba and Akwa Ibom, according to the Office of the United Nations High Commissioner for Refugees (UNHCR). The same source indicates that women and children constitute 80% of this population, exposed to begging for some, to sexual and gender-based violence and to prostitution for others. This overwhelming information cannot leave responsible leaders indifferent. Yet, this is the case of Cameroonian leaders. I am devastated by their insensitivity and inaction in the face of such disaster and such suffering that martyred our brothers and sisters. Unless they do not consider them as their compatriots, I cannot understand such indifference.

To those Cameroonians from the North-West and South-West regions who are and will forever be my compatriots, I would like to testify on this World Refugee Day, the expression of my deepest sympathy and solidarity with your suffering.

I have never been comfortable with the situation of abandonment in which you find yourselves. That’s why I did not fold my arms. Since last May, we have been trying to visit the refugee camps in Nigeria to bring you comfort. We took the necessary procedural steps with the offices of the United Nations High Commissioner for Refugees (UNHCR), the World Food Program (WFP) and the Nigerian Consulate in Douala. We have also moved closer to a Cameroonian Foundation in the English-speaking area to share experience with such a visit. Unfortunately, we have not been able to obtain the necessary security guarantees that would have allowed us to carry out this mission, which is close to our hearts, without undue risk. Without discouragement, we continue to work on it. God willing, I will come here shortly to take you home, to our home in our dear and beautiful country.

My dear compatriots, my concern regarding the critical situation prevailing in the two English-speaking regions of our country, with all its consequences, is not at all new. From the beginning of this crisis, we drew the government’s attention to the risks of a blind crackdown on protests and a slide into an internal armed conflict. Alas! the bad will, the contempt, the incompetence, even the political calculations of the leaders finally installed our country in a disastrous fratricidal war in all respects.

In the legacy that President BIYA will leave to the Cameroonian people, there will be in good place the multiplication of the political and social fractures. The civil war in the North-West and South-West regions will undoubtedly remain the deepest wound to the unity of our country and to national cohesion.

The seriousness of the situation in these two English-speaking regions reminds us of the tragedy that struck in the past the former region of the Sanaga Maritime and that of the West. We believe that it is not irreversible, however. Indeed, the CRM through the project that I carry, proposes concrete solutions, not only to put an end to the conflict and allow the return of our displaced compatriots or refugees in the forests and in Nigeria, but also for the reconstruction of our national unity:

I invite all Cameroonians, regardless of their political persuasion, their ethnic or religious affiliation, to get involved in the implementation of these proposals with a view to a rapid return to peace in these regions, a guarantee of unity national, reconstruction and development of our nation.

To the innocent civilian populations of the English-speaking regions in general, I would like to reaffirm my solidarity and compassion. You have always managed, throughout the history of our country, to show patriotism, openness and hospitality. On this World Refugee Day, I urge you particularly, despite the situation you find yourselves in, to keep the same spirit, to resist the temptation of the identitarian closure and the rejection of the other, which the tragedy you are suffering could drive you towards.

The National President of the CRM,

Candidate for the presidential election

Diaspora
Back to Main Page