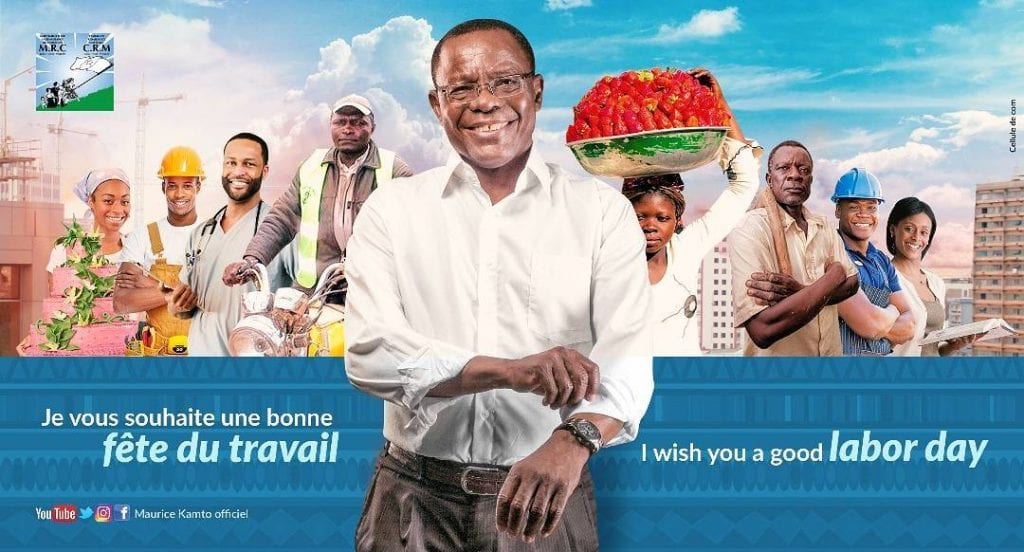 This Tuesday, May 1st, 2018, the 132nd International Labour Day is celebrated. It is placed this year under the theme: “Social dialogue: a factor promoting decent work and socio-economic progress in Cameroon.”

This Day gives you the opportunity to exalt the achievements of your permanent and legitimate fight for the improvement of your working and living conditions. It also offers you an opportunity to scrutinise the future with lucidity, to meditate on the fundamental issues of the world of work and to make proposals to decision-makers, in the absence of demands in the strict union orthodoxy.

For the last ten years or so, your concerns, as championed by the trade unions that represent you, have focused on the need to improve the worker’s conditions with a view to achieving decent work; the need to revalue the Guaranteed Minimum Wage (SMIG); the harmonisation of the retirement age; the widespread medical coverage for all workers and their families.

Instead of bringing the social partners together in order to frankly address these problems and to provide adequate solutions, the government of our country is multiplying tricks and merely put in place strategies to divide and weaken the unions that represent you.

We were very sensitive to this situation very early on. Indeed, since its creation, the CRM has seen in the Cameroonian worker one of the major assets of its project of economic modernisation of our country. Therefore, it has made concrete proposals to improve your living and working conditions:

The significant increase in SMIG from 36,270 F today to 55,000 F; this increase may be increased in the medium term, depending on the increase in national wealth.

The generalisation of the retirement age at 60 years minimum.

Secondly, as part of the education project:

The creation of technology training institutes for the training of middle management in all departments, providing initial training but also allowing job-seeking workers to change the corridors in order to fit more easily into the professional world;

The creation of Trades Centres run by experienced practitioners, which will enable young people with little education to acquire a trade.

Thirdly, in the framework of the production project under the leadership of a strategist State, inventive and liberating the creative energies of our populations:

A national land-use planning policy, with the main pillars: the development of energy production with an energy mix policy; the development and modernisation of infrastructures, particularly in the field of transport;

The implementation of a national industrial policy based on the choice of strategic sectors and the promotion of national champions;

The development of a world-class financial industry cluster in Cameroon with, among its pillars, the settlement of the national currency issue, the construction of a stock exchange of continental level and the creation of a sovereign fund acting as a financial arm of the State.

Fourth, in the framework of the social, cultural national solidarity project:

The rationalisation of the health map of the country;

The implementation of a minimum universal health insurance;

The development of the national pharmaceutical industry and the medical equipment and materials industry;

The promotion of a new housing policy with the objective of “one family with one decent roof”;

The promotion of a national culture based in particular on support for the cultural industry and the establishment of a real status of artists and the construction of a multifunctional cultural complex in each of the 10 regions of the country, all crowned by a National Academy of Culture and Arts

The development of basic sports infrastructures at the level of each subdivision of the country;

The promotion of the idea of National Solidarity through the creation, among others, of a National Service for Solidarity Volunteers (NSSV).

Dear workers from all walks of life,

All this is possible only if we realise in this 2018, the change that Cameroon needs and that is demanded by all its children of all origins and all social classes.

For that, I count on you, you can count on me.

I wish you a pleasant International Labour Day, in restraint and dignity.

Back to Main Page